Recently in the news you may have heard about concerns regarding trade. From the now defunct Trans Pacific Partnership to existing ones like NAFTA, concern across the board centers around the fairness of such trade deals. Is there really a trade? What do we get in return? What minimum can we give to attain the maximum we receive?

Trades may seem out of place in the world of invitations. After all, is there really an invitation if an exchange simultaneously occurs?

You may not have a personal experience that adds the oomph you need to compel someone to accept your invitation. Telling said person to come and see may not fly far either. Have you considered a trade?

Trade invitations bring down barriers because it evens the playing field. If the person you invite feels intimidated by your invitation, a trade establishes common ground. After all, if you ask someone to leave their comfort zone and take a risk to learn something new, what will you do in return?

We do not advise you to become carried away with such invitations (I’ll go skydiving with no parachute if you come to our study group), but we encourage you to think thoughtfully and prayerfully about it. You may go visit their church once if they visit yours. If you watch our last message, A Preview Picture of God, you’ll hear Pastor Silva share a story of how he played one on one with the best teenager at a basketball court in Guam. The trade? If the pastor won, all the kids would have a short Bible study. If the other person won, the pastor would take them out to eat. Hint, everybody was happy at the end!

To certain people our invitations may come across as abrasive and/or supercilious. After all, we may appear to sit on a throne surrounded by safety nets, and our invitations appear as reaching out to the people “out there.” This is why Jesus came down to Earth – to reveal the Father’s love for us. Simply writing letters perched atop a throne would not do. No, Jesus immersed Himself in humanity’s culture, walked among us, and suffered as we did.

Consider trades when you are trying to break down barriers and other types of invitations don’t cut it.

The Book of 1st John

It is not hard to identify John’s message with great ethos regarding the true salvation he experienced through his interaction with Jesus Christ. In this study, we attempt to see what John saw, feel what John felt, and touch what John touched as he handled the greatest gift given to humanity.

END_OF_DOCUMENT_TOKEN_TO_BE_REPLACED 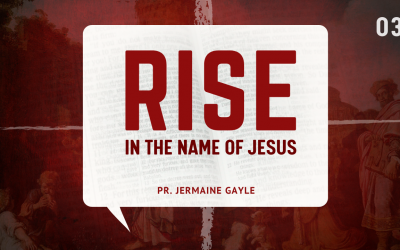 Rise in the Name of Jesus

END_OF_DOCUMENT_TOKEN_TO_BE_REPLACED

Repent In The Name of Jesus